We’re Back?! Plus new from Cancon and the Barcelona Open

It’s been far too long since I’ve updated this blog, but with the PhD side of my life finally wrapping up I can return to my blog! Yay!

So I’ve got plans for the coming year hobby wise, keeping it light so its doable, but more on that later. I wanted to start off with some news that’s coming out of the recent Infinity events in Barcelona and Cancon! If you haven’t had a chance to look at Bostria’s Cancon video, you need to do so now, and you can watch it on White Noise's facebook page (here).

Mostly coming from the Barcelona Open’s video we have a few spoilers of some incoming renders for the major factions. For PanO, we have a third Zulu Cobra sculpt, this time female and with a Shock Marksmen Rifle. I know a mate of mine will enjoy this! 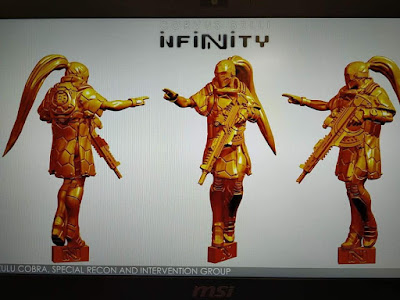 Yu Jing is getting a second Haidao sculpt, this time the MSV2 Multi Sniper Rifle loadout. Very useful profile for the new Invincible Army who lack anti-camo tools. He’s also got “wild card” so can join all fireteams in the sectorial. 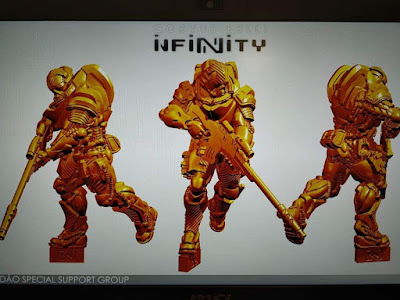 For Ariadna we have an SWC box for the Frontoviks incoming, packing an HRL, Molotok, an AP sniper and I think a T2 rifle. So yay more Ariadna T2 (T2 is a mistake :P ). 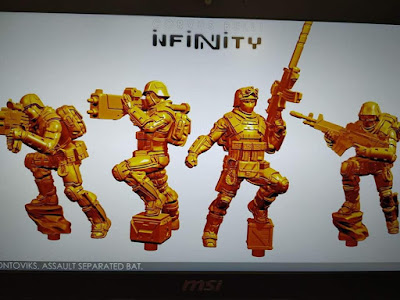 Next for Nomads, a merc character, the Rogue Myrmidon Perseus (and a dossier for him). I know a lot of the Australian fan base are impressed with this sculpt. Also fitting that it’s Perseus who goes rouge…for those that know the story of Troy. 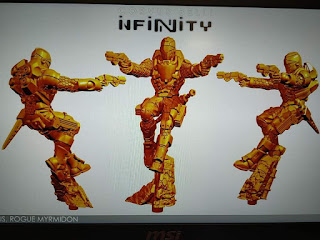 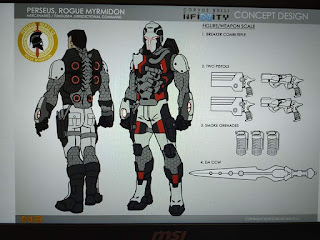 Finally, shown primarily at Cancon, 2 renders were shown for NA2 stuff. A much-demanded Brawler SWC box with a medic, rifle, HRL and MSV2 Multi Sniper. I’m glad that the HRL has a Yu Jing vibe (kinda want to make an Ikari list, but want everyone with Yu Jing weapons), but this sort of kit goes against converting minis to fill out this profile that the fluff gives it. Oh well! 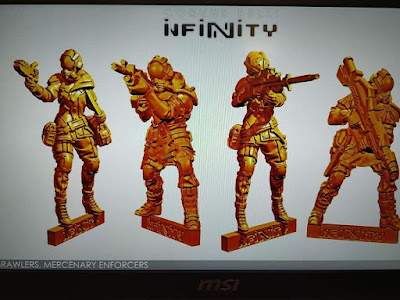 And alongside the Brawlers we got a render for the Druze Security Chief Arslan from the Outrage manga. Druze players rejoice for his is a bit of a bad ass! 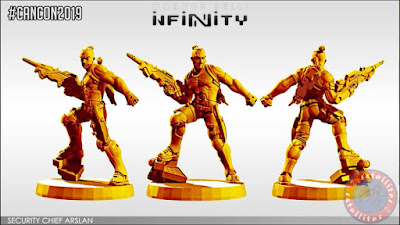 Red Veil comes with two factions; in Icestorm it was PanO and Nomads while in Red Veil it’s Yu Jing and Haqqislam. The faction choice for the first box came down to Red vs Blue, so it looks like that this time round we’re going down the “Yellow-Green” vs “Yellow-Orange” path!

Unlike Haqqislam, Yu Jing is a faction that I’m really into and would be my primary…well JSA would be my primary, followed by Yu Jing, but the point still stands! And man do I love these new models. It’s just a tad awkward that I recently painted (wait what) my Zhanshi. Much like Haqqislam, Yu Jing and Haqqislam have already had 2 starter packs, and it’s really cool that they now have a third starter pack, and how amazing it looks!

The line troopers for Yu Jing are the Zhanshi, a stock standard line troop known for being better at stabbing you but little else. Compared to the Nomad Alquaciles they have an extra point of CC, which sometimes help, but means in a lot of vanilla lists players use the JSA Keisotsu as the order generators because they are cheaper. There’s nothing fancy about these guys; standard combi rifle loadout, various weapons loadouts, standard specialist loadouts and an Lt option. One advantage that they have though is that the Lt does not cost any swc unlike some factions, meaning you can hide your Lt among the other Zhanshi. What’s really interesting is that these guys have broken the 2:1 male to female mini ratio of grunts, which is really cool and makes up for the sheer number of dudes in ISS. 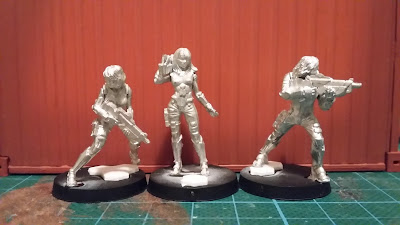 Next up, we have the Tiger Soldier…and god do I love Tiger Soldiers! I’ve said a few words on the Tiger’s briefly but they are considered one of the best AD troopers in the game. This one here has an assault hacking device and a combi with a light flamer. The combi+light flamer already makes it a rather useful unit, throw in that it’s a specialist and you can drop in on an objective right where you want to and take it. You do though need to be careful with deploying Tigers as when they arrive your opponent might get a free shot at them. I love the new range of Tigers, and with her I now have 3 (boarding shotgun, spitfire and assault hacker). Now I just need to figure out how to transport her… 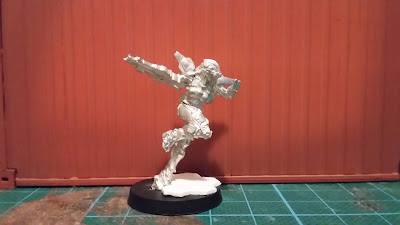 Next up we have a Zuyong with multirifle, and it’s about damn time we had another model from what is the basic Yu Jing heavy infantry! Annoyingly this one isn’t the generic Zuyong so it can only be used for a single profile; however a multrifle backed up by 2 breaker pistols isn’t a laughing matter. Also I really love the pose. Stat wise, the Zuyong is pretty basic for an HI, however it has this brutal BS13 which is no laughing matter, and for a “line trooper” is insane. I’m a huge fan of the HMG Lt who also packs an automed-kit. This guy is going to be a part of an HI sectorial, so I’m looking forward to being able to link them (and sad that I can’t duo them). 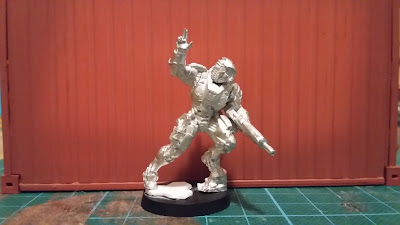 The last model in the starter set is the Hsien, another HI but that’s Yu Jing’s deal, but strangely one armed with an HMG. Hsien’s are considered some of the elite of Yu Jing, and in the lore are the Jade Emperor’s hands, and routinely rock around with ISS. They have awesome stats, MSV2, MA1, but interestingly no kimetica. Not is all lost however as the HMG can be an Lt, so you do get a very aggressive assault piece with an extra order. I find this model a bit of an odd choice as the other new starter packs (PanO, Nomads, Haqqislam) have snipers as the special weapon, and talk on the warcor forums about not including HMGs in demo lists (which I have done…). Still awesome. 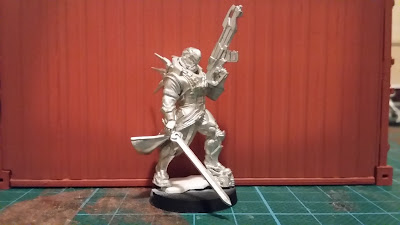 The Red Veil exclusive is a model that has been in of an update for a while, the Ninja! But not any ninja, it’s a ninja with a tactical bow! This was a profile added in N3, and I’ve used it to not too much luck and generally avoid it (despite how dirt cheap it is). With HSN3 they created a new profile that also has a killer hacking device, and anti hacker hacker basically, a unit that I have used to great success! She doesn’t cost any swc, is an infiltrating specialist who can deal damage in CC with MA3 and a DA ccw. Also the tactical bow is an interesting, but hard to use weapon. It’s DA ammo but uses the user’s ph (11), and has a really short range BUT is silent so if you attack out of LoF no one can respond to it! 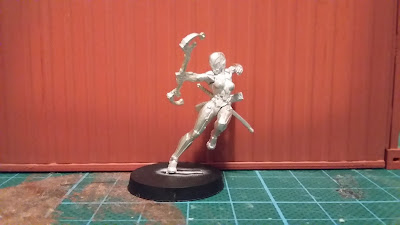 Red Veil comes with two factions; in Icestorm it was PanO and Nomads while in Red Veil it’s Yu Jing and Haqqislam. The faction choice for the first box came down to Red vs Blue, so it looks like that this time round we’re going down the “Yellow-Green” vs “Yellow-Orange” path!

Haqqislam is also a faction that I’m not really into. I don’t know much of the tactics or play style of the faction bar impersonators, lots of good doctors and a lot of mercenaries in one sectorial too (so Mr Yuan Yuan can technically join them). It’s nice though to properly own both sides of a demo set for demo purposes!

As with all packs this one comes with three basic line troopers, the Ghulams. Compared to the Nomad Alguaciles they have 1 extra point of WIP, which is their main faction boost. This makes them rather good specialist. On top of that they don’t have a paramedic option like the other factions have in their basic line trooper, but instead they have a full on doctor with doctor plus, so they have that going for them. Unlike most factions though their base weapon is a rifle + light shogun. This gives them an interesting edge within 8”. The rifle + light shotgun is a common theme for this faction too.

We then have the TO sniper the Tuareg; infiltration, TO camo, multiterrain, sniper rifle and mines. Since Haqqislam is a bit lower tech than the other factions they don’t have too many multi weapons, so she misses out on the brutal multi sniper; however, it does use shock ammo so nothing to sneeze at. She’s good at AROs and using mines to cover her flanks.

Another interesting unit I know little about, the Zhayedan. It has decent stats, an automed-kit and veteran L1 (so it cares not for retreat) and is armed with a breaker rifle + light shotgun and has marksman L2. Firstly, the breaker rifle uses your BTS instead of ARM for damage and halves it, so most units aren’t going to fair well against it, add to that this guy ignores the -3MOD to you being in cover and adds shock ammo to the weapon and a BS of 12 means that this guy is most likely putting you down quickly. So a rather useful piece who can also be your Lt. Not bad!

Finally, in regards to what will be released as the Haqqislam starter pack we have the Khawarijs super solider with a rifle + light shotgun. Along with being another Lt option (so 5 Lt options in a starter, not bad), bioimmunity, super jump, religious, and poison (which is a CC boost), you have a fairly scary unit. Sure it’s ARM isn’t amazing so it can go down quickly, it can very quickly get into a decent spot through jumping around. In saying all of this they are a cheaper and watered down Tarik, the original Khawirij, but for 27 points they are pretty good attack piece.

Since this is Red Veil that we are talking about here there is an extra unit in the pack, and that’s the redesigned Ahl Fassed now called Al Fasid. This beast has an HMG + light grenade launcher with normal and smoke ammo, a heavy pistol, mines, sicth sense L1 and veteran L1. Since this is a totally new unit I have no idea how it will fair, however based on the stats and the load out his about locking down an area and providing cover fire to allow other to advance…and sneaky camo hacking in his ZoC won’t as powerful.

And as a shout out to Penemue and their blog here's unpacked minis.